Testimonials
When one of my students Abhi reached out to me he had been suffering from GAD (and eventually panic attacks) for 15 years. He lived in a constant state of worry and unease. His recurring depressive and bizarre thoughts were centred, among other things, around getting old and dying. At the height of his anxiety condition, not only could he no longer sleep, but he started suffering from panic attacks while breathing and drinking water! Holy shit! Two pretty important things right there and he’s struggling to do them! Imagine that!!
Abhi had been to doctors and shrinks, and had been taking medication for years. Over time things were just going from bad to worse. Out of desperation Abhi’s wife turned to Amazon and found my book attackpanic. She bought it for Abhi, and after reading it, he reached out to me, and subsequently joined my 4 week one to one coaching program in the beginning of 2018. The rest is as they say history, but I should step aside right about now and let Abhi tell his own story from here. 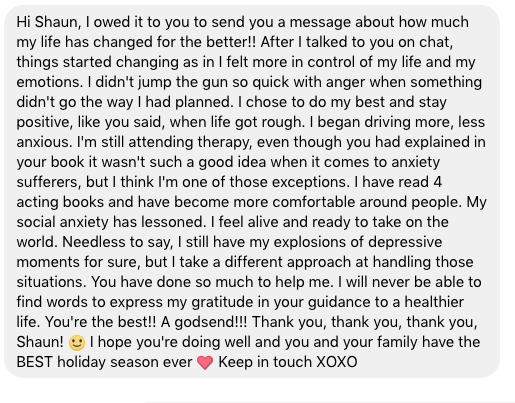 And that included my husband! ALOT of my own marriage stuff came up this past week. How different we are. How I stuff so much to not jeopardize my "saftey net". All the noise and dirt and differences of his life and mine that clash. And how much I really love living ALONE! I will process this reality over time. He's home now and I am more anxious about him being home than I was about him leaving! Ive tapped into ME and I am thrilled. I feel hugely free in many ways tho I know I have plenty of work to still do.
Sorry so long but I couldnt wait to write you. I hope you read this. I hope you know God gave me you for this next healing phase which I believe is the  end-phase of this 50 year battle. Thank you. You are with me for the rest of the journey through and I will keep you posted on how Im progressing  With much love from the other side of the world," - Kate (New Jersey USA)
Hello Shaun, I found your wonderful book at our local library and it has been a real catalyst in that I have had times of
anxiety over the years and now know what to do ! Thank you so much for your insights and your own remarkable journey. My question is, can I buy a copy of your book? I am thinking also, of my Granddaughter  Holly, who at 16, has anxiety...very creative and super conscientious.  Has a particular phobia about vomiting. Perhaps you could suggest something for her as well as reading your book. Apparently it is not available in the Hutt valley library system.  Many thanks, Hannah (New Zealand)